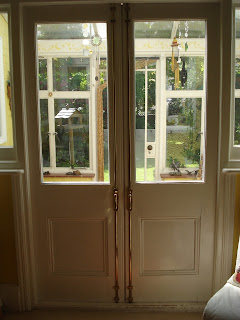 Well that was just me with our French Doors/Windows which lead from our Lounge to our Conservatory. They were only glass from the waist up with solid panels below. My husband had restored them years earlier during decorating and had updated the fittings to Crémone Bolts, (sometimes called Espagnolette Bolts but ours are definitely half round rods), but he didn't change the overall appearance. 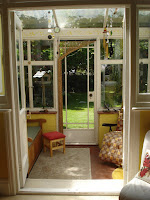 In the Summer it is so good to open the doors as it lets the light in and makes the lounge much bigger. At night they are closed for security and as the conservatory isn't heated, they are often closed at other times too. 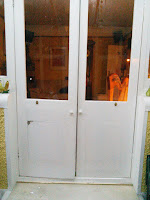 We put our Christmas tree in the conservatory where it keeps so much longer as it isn't affected by the central heating, although having an open fire in the lounge does lead to us opening the doors when it gets too hot! 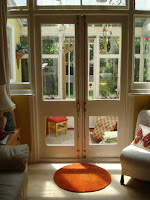 Anyway, when we need to close the doors I just thought, "Wouldn't it be nice if the bottom solid panels were glass too!"

I happened to voice my thought to my husband and he agreed so the plan was hatched! I was despatched to the local glass shop to get some safety glass. Then a trip to B&Q for some beading and panel pins. Lots of noise later the solid panels were removed and the door frames were prepared for the glass. 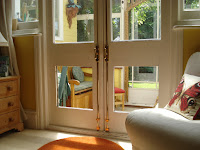 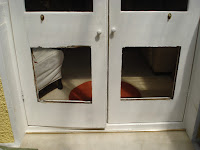 Obviously an ideal time for teenage son to climb through the holes as he wouldn't have the opportunity again! 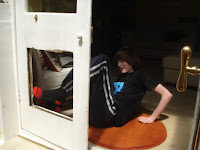 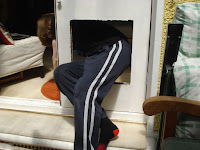 The glass was secured by some beading, then a bit of filling and a dab of paint. 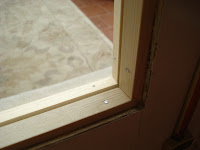 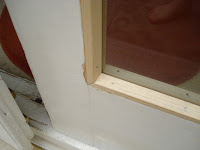 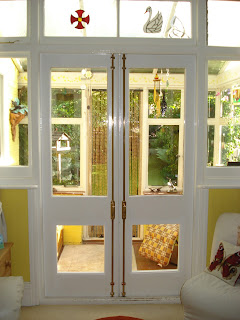 And there we have it - 2 lovely renewed French Doors.

Loads more light into the lounge.

Looking forward to Christmas now as we'll be able to see the tree so much better.

It's lovely when you can alter something to just how you want it.

They look great, and so much lighter.