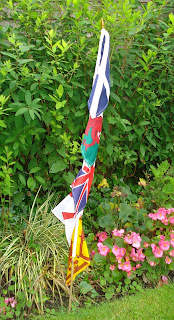 Sometimes in this life you just have to work out how to do things yourself.

Not having been able to locate a flagpole with at least 3 flags on it, I thought I'd make my own. I just knew I had some little flags "somewhere", so under the stairs I went.

I found the Scotland flag (top) in the first cupboard, but it took emptying out the old dressing up bin from the second cupboard to find the others.

The other British flags going down are the Wales, Union, England and Lion Rampant of Scotland (but I don't think this is a complete version.) 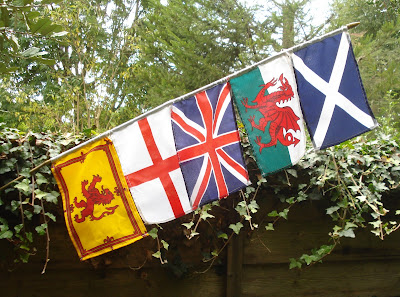 Then I had the task to get them all on a piece of bamboo where the joins were too thick.

So out came the penknife to whittle down the thickness!


Then where to place it for a good photo. Upright didn't work, but into the ivy on the fence at an angle was much better.