An Attitude of Gratitude #24 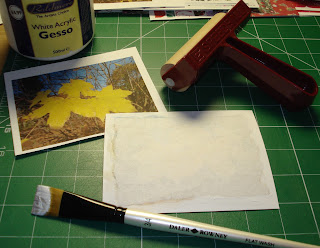 Another day on "An Attitude of Gratitude" (only six more to go!!) and the theme is Photographs. I take lots of photos mainly of our day to day stuff and I scrapbook them ALL.The technique was to do a Gesso image transfer. Hmmmm! Tried that once before using the sticky tape and magazine picture method and I was not impressed then but thought I'd give it a bash all the same. As my motto goes, "I'll try anything twice!" 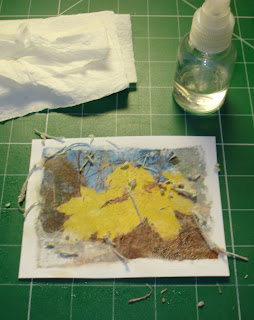 Thought it best to try it out on some spare card first just incase I ended up with a hole on my page! Of course I had to let the gesso dry with the image imbedded in it - so what better than to make a few more Christmas cards in the meantime!

The paper backing seemed to rub off OK to start with but I never know when to stop so as the ink was lifting I thought it best to stop there. 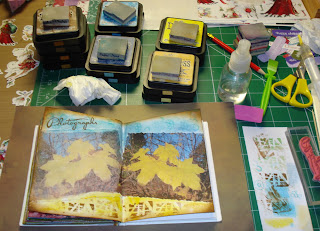 Can't say I am anymore impressed with this technique than I was first time I tried it. Would much rather use the original photo myself, so decided to do just that. Only advantage of the transfer was that it was a mirror image so I stuck them down on my page like a reflection.

I inked the left over parts of my page and fortunately had a stamp of the word "Photographs" so used that. I had had a practice at making a rubber stamp earlier from a rubber (well the end part) and it wasn't half bad so I used that too. 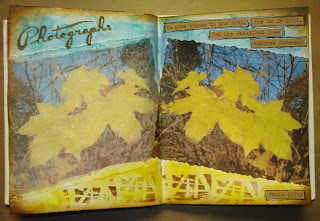 Oops then I remembered the scripture, so got my trusty typewriter out and used some brown parcel paper.

Hmmmm! Something was missing? 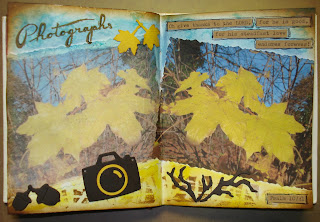 Yes I got it, I should "scrapbook" my photographs by adding a few embellies so I did that too. Thought I better stop there.

Looks like a really interesting technique. I've done the transfer technique using 'glue n seal' but not with gesso. I thought they were daffodils until I enlarged the photo! I like how you use your typewriter and the word 'photographs' looks really good.
Juliax

I think this turned out great! Love the mirror image and the camera embellie! I wondered if Bernice had mercy on me and picked the image transfer challenge to give me a breather! I have unexpected guests for the weekend and probably won't get at my page until tomorrow afternoon.
I did some youtubing and found that people do the transfer with ModPodge, gesso, gel medium and sometimes even just water. The way I saw Donna Downey do it, she pulled the paper right off without letting it dry so that is what I was trying to do.
Have a great weekend!

Gorgeous pages and your technique is awesome!!! I should try to do this some time.

I feel flatter that you asked me for tips. If you have seen my posts you will notice that I'm not an expert, my work is very sloppy. I just can say... practice with simple designs and have fun with it. Use erasers to practice if you haven't done it before and until you feel comfortable use the big carving blocks... just have fun.
I don't know if this help, but for what I have seen in your blog, you can do anything!!
Have an amazing day!
Nora

Gesso is one of those transfer techniques I've never had much luck with. I tried it way back when I first saw it in a Claudine Hellmuth workshop book. It didn't work for me then, and I doubt it would work for me again. However, you did a fantastic job with the transfer. I'm in awe, even though you were less than impressed. After all, the end result is both stunning and thought provoking.