The end of the Craft Barn's year long Alpha Challenge draws to a close. Both of the last letters "X" and "I" have been given to us with a deadline of the end of the month.

I have done both pages and must get to sorting out the pages into a book before the end of the year too. Perhaps I'll get to use my "Bind-It-All" from last Christmas for the first time then - LOL. 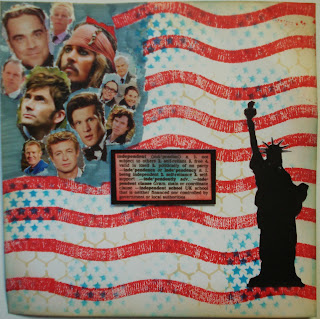 Anyway, I asked my son what special days to do and for "I" he said Independence Day. For the "X" I had to resort to Xmas despite the word smarting with me, and having done Christmas back in January! I have however added the definition for "X" on its own and as it can stand for Christ and the Cross so it isn't really a derogatory word for Christmas after all.

For Independence Day I had a play with the American "Stars and Stripes" flag, so I flipped through my latest Radio Times and tore out some "stars" for the corner. I curved a border stamp on my acrylic block for wavy stripes. The Statue of Liberty was printed from the internet. 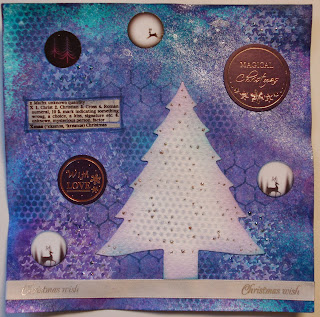 For Xmas I sprayed my backing with Dylusions (at the same time making my sprayed backing for my 12 months zine - well don't get my spray booth out that often so had to make the most of it!). I have been trying to use up bits and bobs I have hoarded over the years (Christmas and otherwise) so after some stenciling I stuck those on.


So there we go, a wonderful challenge has come to the end. It has been great, many thanks to the Craft Barn - next challenge starts 12th January 2014.
Posted by BJ at 4:25 pm

Amazing pages sweetie, I LOVE your take on the stars tee hee, can't beat a bit of eye candy. I'm so annoyed I missed posting my S pg but I will scan it soon and get it blogged, onwards and upwards with the X, I, and cover hopefully.
Huge hugs x x x x

Looking at my dictionary I think I'll be doing Xmas too.. done the I page, just need to blog it, as I want to do both together... Have a good day.

Terrific pages and I am sure you book will be brilliant

Excellent pages BJ, as have been all your previous ones. I hope we get to see your completed book before too long. SO come on! Get that unused Xmas gift out and put it to good use ;o)
I am very proud of myself for having completed the challenge all year long - well I will be once I decide what I'm doing for these lsat two letters :o))

Particularly like the "stars" on the flag and the background on Xmas. I have enjoyed this challenge so mucg. Have a good Christmas.

Hi BJ... I've enjoyed seeing all your special 'Alpha' Days each fortnight...and these last 2 are as just as fabulous and imaginative as the rest...It's also been wonderful seeing what everyone else did with the challenge...Jan x

Love the background on both pages, clever the way the Independence one is made to look like the flag.

2 gorgeous pages BJ your book I am sure will be looking fabulous, go on dust of the bind it all.....lol.

Two great pages! It's been a wonderful challenge, can't wait to see what the next one is!

Wonderful takes on the letters.

Wow, these are two amazing pages. Great take on both letters.

Hi BJ, two fab pages to finish off the year with! I didn't want to choose Xmas either but there isn't much to choose from with X! Claire x

Hi! I love the way you have kept to your self-imposed theme throughout the year. Another great couple of letter choices.

Beautiful last two pages BJ and congratulations on completing the challenge.
Thank you for playing with us at the Craft Barn and Happy New Year.
Izzy

Hi BJ - I love your stars on Independence Day and the overall concepts for both pages. Your book of festival days is truly amazing (I checked out your blog to see if you had used your BIA-hope you don't mind). I think the kraft pages look great too, better than black ones. See you at the new challenge.