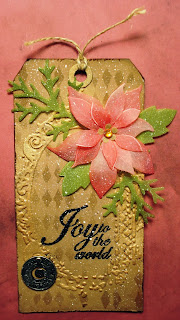 Horrah, how good it feels when you create something, even more so when you are inspired by a blog and make do with what you have or can purchase.

I have been pondering Timmy's December tag for a few weeks since it was published and wondering whether I could make do without a Poinsettia die - I think not. But could I get his one - I think not. So I ended up with the Poppystamps one which I bought today at The Craft Barn. It had shown as "sold out" on the web but I spotted it in a curious basket under the counter and asked and yes it was awaiting being put out. Hurdle ONE. 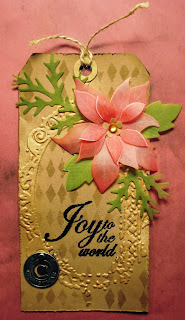 I didn't have any of the film stuff and my die was a thin one anyways so I opted for vellum and distress inks which worked a treat. I also used a tag I had previously (in another life as it was so long ago) embossed and "golded". Not a Timmy stencil to be had at the shop either so I used my Dylusions one. I had a Christmas token hanging around so added that too and some string from one of the tags from my décopatch items.

Loving your version of the tag x

Hi BJ, I love your take on Tim's tag and considering you had neither the die nor the stencil you have done a fabulous job! I too, have tried to get the poinsettia die, but sadly could not but your poinsettia looks just as beautiful. Hope you and yours have a wonderful Christmas. Hugs, Anne x